There are certain rules in life that aren’t to be messed with. I don’t mean the easy ones like don’t eat white bread after Labor Day. I am talking about those unwritten rules that any sensible human being understands and abides by.

The scene is an airplane, a guy, and me. Got it. Understand what is happening so far? Great.

I am in row two and the dude is directly in front of me.

What does row one get that the rest of the plane doesn’t get? That’s right, more room than even the captain. There are 22 linear feet between the seat and the wall. For me in row 2, there is enough room to barely slip a piece of paper between my legs and the seat in front of me.

Before I get to the inevitable, I must also tell you that I am in the middle of an aggressive allergy attack, causing me to sneeze and snot uncontrollably. Not really part of the story, just thought you would like to know the entire situation.

Within 11 minutes into the flight, the dude in front of me slams his seat back with such force that I thought perhaps he was in a 3D flight simulator. My coffee spilled, my computer slammed shut, and a throbbing pain shot from my knee to my ankle with eager intensity.

After a few seconds of gathering the information necessary to understand what had just happened, I tapped my “friend” on the shoulder and asked if he would mind moving his seat back up as I was losing feeling in most of my body.

This has officially escalated.

“I understand that but if you would do me a huge favor and move your seat up, I will be able to breathe again,” I responded.

Chief? Did he just call me chief? So obviously I hit the attendant call button and told on him. It seemed like the mature thing to do at the time.

After a few minutes of back and forth and him continuing to refuse to move his seat, I finally relent and let it be. I did, however, let him know that he was on a secret list of people I hate and that I will wish bad things upon for the rest of my natural-born life.

He didn’t seem to care about that either.

The plane lands and as I’m standing up to get my bag, I give him another menacing stare. This is my last chance for this guy to know the true pain and annoyance he causes other people. I had been thinking for 90 minutes of all the things I would say when I was face to face with the dude. I even jotted a few notes down – “idiot, annoying, selfish” – just in case.

The guy darted out of the plane quickly and efficiently, bolting off to his day of meetings and high-powered people. I was pissed that I would never see him again, and that he would never truly know how he had ruined my flight.

A couple of hours later, I had nearly forgotten about him as I drove to a new client’s office for a meeting then on to golf with his boss. My smile had returned and a bounce in my step!

My head was held high as I walked into the conference room titled “The Meta” for some godforsaken reason. There my eyes lock in on airplane boy.

That’s right. He was the boss who flew in to play golf.

My rage was instant. I didn’t care that he was a major client and that we were going to play Pinehurst #8 that afternoon. This fella is a snake and he ruined my flight.

I refuse to shake his hand and stand firm and tall. My mouth opens, my brain stops, and I frantically check my pockets for my notes. Can’t find them. I’m panicking and making what would constitute bird calling sounds now instead of words. I check my pockets 38 times in nine seconds.

Gone. My mind’s eye places them on the seat of the plane as I reached into the overhead compartment.

So, if you are flying in row two today on Southwest flight 187 and reading hateful words on a napkin, you now have context. And be careful when you reach into the overhead because things might shift during flight. 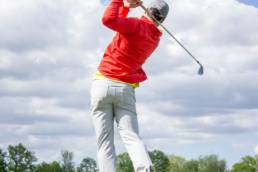 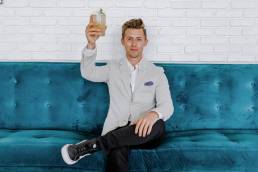