|In Features
|By Caitlin Moyer

Instagram is the most popular platform for influencers with nearly four in five brands predominantly tapping the network for campaigns, but TikTok has seen a huge spike over the last year.

And while many brands often tend to give away free product samples (or discounts on more expensive products) rather than paying cash to their influencers, there is still a lot of money to be made.

There are two primary ways of categorizing influencers: reach and niche. As a general rule, targeted reach, cost-effectiveness, engagement, authenticity and accessibility all go up as follower count goes down. Thus, many brands are leveraging relevant niche influencers to more intentionally target audiences and as one such niche, this is just another area where the golf industry is thriving right now.

Take Garrett Clark, for example. Once he saw the opportunity to make money on YouTube and Instagram by doing something he was already doing for fun–playing golf and hanging out with his friends–he took a gamble and dropped out of college to focus on his company, GM Golf. When he easily eclipsed $50,000 in YouTube advertising alone, he knew he had made the right decision for the time being. He now has over 400,000 subscribers on YouTube and over 312,000 followers on Instagram.

Garrett was inspired to start making his own videos by George and Wesley Bryan, better known as @BryanBrosGolf, who were influencers before influencers were a thing. The duo was able to make careers out of performing trick shots on YouTube, Instagram and Twitter through brand partnerships with huge companies like Callaway Golf and GoPro. They traveled to tournaments and appeared on the Golf Channel to perform their acts.  And, along the way, Wesley was able to pave his way to a spot on the PGA Tour. The pair took a break from their routine while Wesley focused on his game, but they fired it back up during the pandemic to provide content while fans were quarantined.

Similarly, Tania Tare is a female trick shot artist from New Zealand who recently cracked 300,000 followers on Instagram. Although she is still aspiring to break through on the LPGA Tour, her social influence has taken her as far as Switzerland and Japan, led to guest appearances on the James Corden Show and Tosh.O, as well as produced opportunities to work with companies like Ping, Adidas and Troon.

Likewise, after finishing up her collegiate golf career at San Diego State University in 2015, Paige Spiranac had professional aspirations; she began posting on Instagram and soon gained a massive following. Her overnight social media fame led to an invite to the Omega Dubai Ladies Classic that year and while her playing career only lasted one year, her new career as an influencer has thrived. Over five years later, she now has more than 3 million Instagram followers, and variety of brand partnerships, including X-Golf, PointsBet Sportsbook, Swag Golf, Bag Boy, Perfect Practice Golf, Medterra CBD and more.

But trick shots and funny videos aren’t the only way to gain popularity on social media.

Take Anthony Taranto, for example. Anthony is an artist who creates amazing personalized Callaway wedges from his California workshop. In fact, if you see a custom Callaway wedge, it was most likely designed and built by him. I had the pleasure of meeting Anthony while visiting with some friends at Callaway a couple of years back, but alas, I do not yet have a custom wedge (hint, hint).

Or, Roger Steele, who simply tells it like it is and is doing his damndest to “make golf cool,”, all while using his platform to promote Hipe Golf, a grassroots initiative to grow the game and diversify the sport.

There are also many teaching professionals who have harnessed the power of social media to grow their own businesses, such as George Gankas, who has amassed over 270,000 followers on Instagram, using the platform to leverage his own online golf academy where he offers exclusive digital content for $49.99/month, as well as his own training tool, the GBox, which sells for $99.95. George’s Instagram feed consists primarily of him working with his students and his affable, easy-going nature makes you want to become one of them. In fact, when I posted a video of myself using the GBox last summer and tagged George, he sent me a direct message with swing feedback, something completely unexpected and a true “surprise and delight,” demonstrating that he truly knows what he’s doing both when it comes to golf instruction, as well online engagement.

So yes, influencer marketing is alive and well and the golf world is no exception. I’m curious–who are some of your favorite influencers to follow? Tag us on Instagram @StickandHack and/or @CaitlinMoyer to let us know!

Caitlin Moyer has been hacking and hoping since she was 10. Over the course of her career in the sports industry, she's had the chance to play the game with LPGA, MLB and NBA players, as well as NASCAR drivers and celebrities, but her favorite playing partner is her dad (even though he is a stick). Inventor and sole practitioner of the one-flap™ golf swing (patent pending). 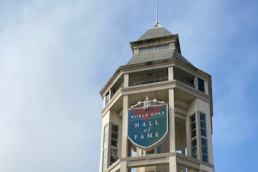 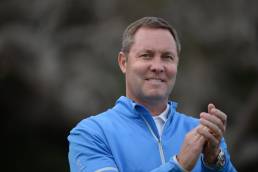