More Important than the Stricker 6? These 5 Keys to Victory

Let’s just cut to the chase. We’re frustrated by our national golf teams. On paper, they represent tour greatness; yet when they come together, they have a less than stellar collective record. The US Solheim Cup team has only won two of the last six matches. Considering that the Ryder Cup team has only won three times in the last twenty-five years, the ladies are doing great.

This feature is not meant to be negative, so pushing past the records, what can we say or do to help our countrymen and women? Based upon the amazing theatre the US and European teams gave us this weekend, I have a couple of ideas. So, I present, “Keith’s 5 Keys to Capturing the Cup!”

None of this is exactly earth-shattering news, and in fact, each point carries weight. One or two of them would really help our cause, but if you combine all five, our team will win. The world has been waiting three years since the last Ryder Cup and five since it was contested on American soil. The pent-up emotion is percolating worldwide like a viral TikTok video.

Captain Stricker: We all wish you and your team the best of luck. Above all else, in the team clubhouse, throw out the ping pong table and replace it with a putting course. Let’s get the Cup by filling the cup. Go Team USA!!

Keeping Score at Work and Why It’s Important

The Scorecard Whether it is the leaderboard on Sunday or a scorecard at the club on Thursday, the scorecard drives behaviors and decisions on the… 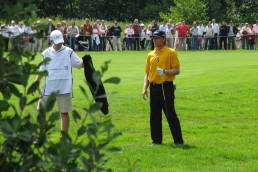 Just How Good Are Pro Golfers?

It’s a fair question. It’s different from other professional sports, like in baseball where if you can’t throw 90 mph, you’ve…

Not Your Typical Championship