|In Op-Ed
|By Caitlin Moyer

Every day for an entire week, my dad and I made the 57-mile drive each way from our house in Milwaukee to Blackwolf Run in Kohler, Wisconsin, the site of the 1998 U.S. Women’s Open.

Milwaukee used to host its own tournament (the Greater Milwaukee Open, site of Tiger Woods’ professional debut in 1996), so I had been to professional events before; however, I had never seen an LPGA tournament and definitely not a major.

I had just finished my freshman year of high school, where I had competed on the golf team.

My dad had introduced me to the game when I was young and I idolized Fred Couples, but after Annika Sorenstam burst onto the scene in 1995 with her first U.S. Women’s Open victory and went on to win Player of the Year, then defended her title at the Open in 1996 and regained her Player of the Year title again in 1997, I had myself a bonafide female role model in the sport.

So, in July of 1998, dad and I had tickets to the entire tournament, including the practice rounds, so I recall getting there early in the morning and waiting by the driving range and putting green, autograph book in hand, hoping to catch a glimpse of Annika and the other amazing female golfers I had thus-far only seen on TV.

Even back then I was an enterprising and creative young lady. I had recently read an article in a golf magazine where the Swede disclosed that her favorite snack was Cheetos, so I came prepared, engaging in an act one can only deem “Dangerously cheesy.”

I don’t recall how I snuck that bag of puffy corn and Yellow #6 on to the course, but I did… and I used it as a way to stand out. As the crowd engulfed Annika on her way to the practice tee, I sidled my way up to her caddie at the time, Colin Cann, and gave them to him, to give to her.

When he in turn went to pass them along, I had my opening. I was able to get her autograph and pose for this super-high res photo right here: 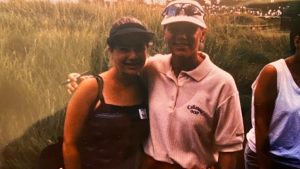 Then, the next day, after walking the course for a bit, my dad and I headed to the driving range and realized that there appeared to be pros hitting from the opposite end of the range as well, since balls seemed to be coming toward us. We decided to wander to the back end of the range, which was fairly-well hidden, and see who was back there.

Lo and behold… it was Annika! She and Colin were back there alone and we respected their space, just standing there in silence and in awe as we watched that perfect swing, again and again. Then, to my amazement, I saw Colin rush off to a spot in the center of the range and lay out a beach towel. “What’s he doing?” I remember thinking to myself, but quickly figured it out as, one by one, Annika deposited probably at least 30 shots in a row, with each of them landing within inches of one another, on that towel. Over 20 years later, I still think of that, when I head out to the range for a practice session. Simply amazing.

Meeting Annika was definitely one of the highlights of that week, along with witnessing one of the most iconic moments in U.S. Women’s Open History…Jenny Chuasiriporn rolling in her 45-putt birdie putt on 18 on Sunday, ultimately forcing an 18-hole playoff on Monday… which meant that dad and I would be heading back to Kohler for our 8th day in a row. 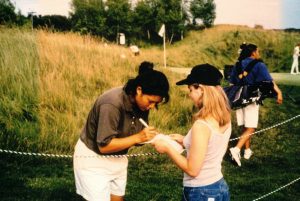 Se Ri Pak ultimately became champion that year, after she took off her shoes to make a shot, providing another memorable moment in women’s golf history, tattooed forever, in my young, impressionable brain.

However, it was Annika who once again was named Player of the Year that year. In 1998 Sörenstam became the first player on the LPGA tour to finish the season with a scoring average below 70 (69.99).

As for me, I continued playing throughout high school, but stopped competing when I graduated in 2001, the same year that Sörenstam won eight LPGA events, including her second major tournament, the Kraft Nabisco Championship. That year she also became the first woman to shoot a 59 in a round of a professional tournament.

She won 11 events in 2002—the most in the LPGA in nearly 40 years—and in 2003 she won the LPGA Championship and the Women’s British Open to complete the career Grand Slam.

From 2001-2005, Annika simply dominated the LPGA, racking up five more Player of the Year titles, bringing her career total to eight.

En route to shattering records on the LPGA Tour, Annika also broke gender barriers, becoming the first woman to play in a men’s Professional Golf Association tournament (the 2003 Bank of America Colonial Tournament in Fort Worth, Texas) since Babe Didrikson Zaharias in 1945.

That same year, she was also inducted into the World Golf Hall of Fame. She won one more US Open (2006) before retiring from competitive golf in 2008.

And, although active in the golfing community through her foundation and various celebrity-type appearances, I haven’t seen much of Annika over the last decade.

I also personally haven’t had a ton of time out on the course during that time either. However, this year, I made it a personal goal to improve my golf game, play more often and work toward competing in tournaments again later this summer.

That’s why, to me, it seems almost like fate that 13 years after her retirement, at age 50, Annika was in the field for the LPGA Gainbridge this past weekend in Orlando.

Just when I needed her inspiration the most, she reappeared. With her classic Callaway hat (I wore the same one all through high school because of her!), her Cutter & Buck attire and the same, sweet, repeatable swing, it seemed like nothing had changed. 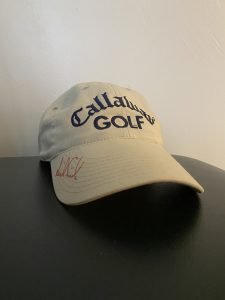 Except it had; in the time she’s been away from the sport as a player, the Annika Foundation has been paying it forward to junior golf in a huge way. In fact, there were 40 Annika alumnae competing against her in the field this weekend, illustrating just what a huge impact Annika has had on inspiring not only me, but so many more young women all over the world, to play this amazing game.

From the interviews to their social media posts, it was clear just how revered Annika is by her peers (the theme of the weekend seemed to be “GOAT”). Several LPGA players, including Mariah Stackhouse, Danielle Kang, and Anna Nordqvist all sang praises to Annika’s name.

As for her showing in her return, I was happy to see her bounce back after a rough start with a questionable ruling on Thursday with a nice round on Friday to make the cut…which meant we could all get to watch her for two more rounds over the weekend.

And, even though her play wasn’t up to her standards and she has made it clear she isn’t planning on returning to the tour full-time but rather, just tuning up for possibly competing in the U.S. Senior Women’s Open this summer, it was still a very nostalgic experience for me and many others. Plus, her attitude and demeanor is still to be admired.

“I never gave up, even though it was not really going my way and I wasn’t hitting as well as I should be to be out here. The purpose was to get some tournament rounds, and I did that,” Annika told Golf Digest.

Yes, Annika, women’s golf is incredibly healthy and we have YOU to thank for your large role in making it possible. I know I speak for many when I say that I hope we can watch you compete again this summer.